Failure. (I hope) we’ve all experienced it. There’s that old quote— 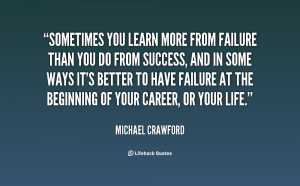 But seriously. Isn’t it true? I couldn’t tell you a whole lot about what I learned from my last “success.” Probably a bunch of the trite things people say like—perseverance, singular focus, bringing other people along, blah, blah, blah….

My failures though. Oooo. Ouch. I can tell you a lot about that. So let’s #RealTalk about what I view as my ULTIMATE failure in the hopes that I can reframe it for myself & show you how to do the same!

Version 1: My Ultimate Failure – Getting “Fired” (Laid Off)

For this one I need to rewind a few years.

That was the day when the Impostor Syndrome went full throttle on me. It was like my worst nightmare had come true. They had finally discovered I really am terrible at my job. I really am a phony. Everything I had accomplished up until that point must have just been luck, timing or thanks to other people. I somehow deceived them, but now they knew the truth—I didn’t deserve to be there.

It’s painful to relive it again (crying as I write this), but critical to the healing process. I admittedly still think about how my life would have been different had I not been laid off on that day. Someday one of my AMAZINGLY talented friends still there will achieve the SVP dream I had. I’ll celebrate with them while simultaneously feeling a bit of envy thinking “If I had never been laid off…could that have been me?” I’m not proud of these thoughts but working to accept them as a part of me!

I am also grateful for the way things ended up! But honestly? It doesn’t make that experience go away. So I’m working hard to know & love this part of my story 2 years later. I’m slowly & gracefully shedding the totally unnecessary shame of having to say “and then I was laid off” as a part of my career story and deal with the questioning looks.

A lot of people say “But they hired you back 5 months later! Isn’t that proof in some way that they know they made a mistake?!” No, it’s not proof.

Have you ever heard that line that it takes 3 compliments to offset 1 critique? When you get laid off (and previously found so much of your self-worth in your work) I think it takes 1,000.

Last thought on the failure story: If you are ever in that room someday…if you are ever in that position where you’re deciding who stays & who goes…tread carefully. That one day fucked up so many parts of me mentally & emotionally. So choose wisely on the ones who can handle that new level of self-doubt and the ones who cannot. I trust I was given this road because I could handle it and had the tools to work through it! Please also deliver the message with care and feeling. I thank God for a certain individual in handling that day with compassion & heart. His choked up voice & tears as he read his portion of that cold hearted, god forsaken script in the conference room meant a lot along with the e-mail he sent me afterward.

Now for the reframed part of this sob story. Let me tell you about how this same story was also the ultimate SUCCESS for me.

Version 2–My Ultimate SUCCESS: Getting “Fired” (Laid Off)

So I got laid off! YASSSS. Here’s a few ways this became my ultimate SUCCESS story that I’m still writing–

The moral of the story is that it’s all in how you define success.

Toward the end of my time at Company T I was completely paralyzed. I was presented with opportunities to take on new roles but I had ZERO confidence in my abilities. I was sure I’d fail in any other role. I remember one mentor I could confide this in laughing and saying “Shannon. Seriously though. When have you ever failed?”

It’s so simple, right? But it completely blew my mind. So then I looked up the definition of success—

Again, remarkably simple. And I got to thinking…so the only way I can fail is if I don’t achieve success? And success is basically whatever I define the aim or purpose to be. So why am I defining it so harshly & so narrowly on my career? And why am I making it about other people so much?

I had been seeking external validation from the one person who I felt could tell me (and I’d actually believe it) that I wasn’t a total fuck up in that first manager job up until this very day. But it’s time to let it go because that’s just not going to happen.

What is in my control though is redefining success going forward. By doing that I will also redefine failure.

For me success is simply learning, growing & doing better the next time.

So the only way I can now truly fail is if I fail to learn, grow and do better next time. With that new definition I’m a SCREAMING success (at least to myself). 🙂

One thought on “What was your Ultimate Failure?”